Youtube doesn’t need any introduction, it’s the most famous videos search engine all over the World. Mostly people find their desired videos on Youtube, almost you can find every type of video here. Moreover, people upload their own videos on Youtube to make themselves popular.

The easier way to access Youtube videos on devices running iOS and Android is Youtube’s app. Variety of iOS users use Youtube’s iOS app to watch videos on their iDevices. The app works excellent on iDevices, though because iOS isn’t open source like Android, Youtube’s app has limitations because of the nature of iOS.

Some features aren’t offered by Youtube app, that are essential for every iOS user. That’s the reason why iOS users jailbreak their devices to get more Android like features on iOS. Now you can embed some excellent features in your iOS device’s Youtube app with the help of “Youtube Essentials” tweak. 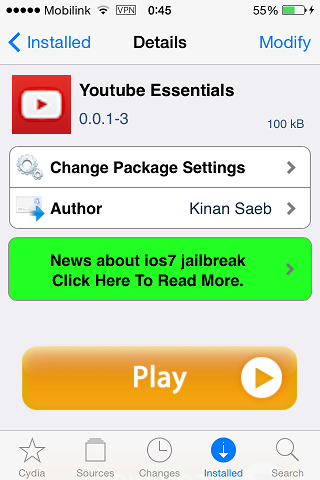 This tweak is available for iOS 7x and 7.1.x running on jailbroken devices in Cydia store. Below are some ground breaking features of this Youtube Essential Tweak: 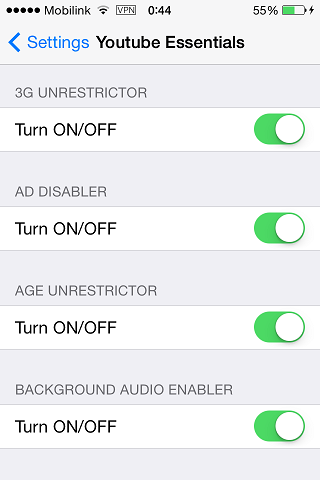 Now you can listen music running on Youtube’s iOS app, even you have closed the Youtube app. Currently Youtube app doesn’t offer this feature for iOS devices, but this tweak helps you to play audio of currently playing video, even your Youtube app isn’t open. Furthermore, the music of video will also play in background even your iDevice is locked.

Moreover, your songs wouldn’t stop playing even you are using other iOS apps. So feel free to use any app or something else on your iDevice without interrupting your favourite songs.

Some third party apps offer this 3G service for iOS users, but this feature is complementary in this Youtube Essentials tweak. With 3G unrestrictor you can play Youtube videos on 3G connection seamlessly with faster buffering speed.

With this feature you can avoid any ads running inside videos running on Youtube’s iOS app. It will disable irritating ads showing up on Youtube’s app.

The default Youtube app keyboard’s color is black, but this tweak will transform your dark keyboard in a white one.

According to me, this tweak works awesome on iOS and is excellent for Youtube lovers. You can turn on/off its feature by going here: Settings> Youtube Essentials. It’s powered by BigBoss and you can get it free of cost.

If you have any other tweak or suggestions, let us know via comments, we’ll love to share it on TechZend.