Posted in Windows • 8 years ago • Written by Hammad Rafique • Comments Off on Run Android Apps on Windows 10/8/8.1 [Best Emulators]

Thinking of running android apps on an alternate platform rather than android Smartphone or tablet? then try free Android emulators for Windows PC. These windows applications known as emulators are designed to run android app on your Windows operating systems including Windows 10, 8 and 8.1. 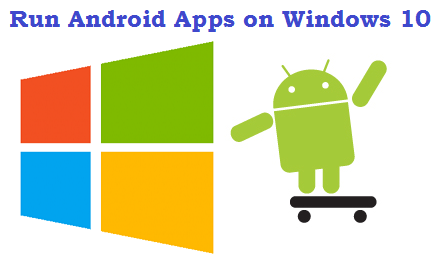 As lots of developers came up with different type of emulators, it’s hard to pick the best one for you that can fulfill your desire fittingly without making your computer slow. So, I’ve picked some of the best emulators to play Android app and games on Windows 10, 8 and 8.1.

BlueStacks is one of the most well-known veteran android app players for windows that permits users to simply install and start running android apps on windows operated computers. The reason behind immense popularity of BlueStacks is that this windows emulator application provides easy to operate user interface and android app running capability in expanded full screen and windowed mode. You just need to download and install app after that just imply login with your Gmail account for Play Store and start installing and using countless android apps on any windows PC, including latest discharged Windows 10.

Andy is compact and customizable emulator in comparison with BlueStack, which is handy for running Android on windows application. But Andy is designed for you, if you are an android gaming addict, since it’s especially made for playing android games on bigger screen PC’s and laptop’s. Once you setup Andy emulator it will provide you full fledged stock android operating system to play around and after synchronizing your mobile apps with Andy you can use your mobile phone as a remote control for playing games on PC. Although app’s configuration is bit complex but provides better productivity.

YouWave is another useful addition to the list of android Windows emulators, which provides a packed android user experience. Although, application is not a freeware and offers only 10 days free trial to have a closer look at its features, but its incredible features will force you to buy it. The most persuading feature of full version is that emulator offers complete front-end and back-end support after purchase. Overall YouWave has a clean user interface that is easily understandable for every new emulator user. YouWave does not have much built-in features, but after logging into Play Store through YouWave you can install and use any android app you want.

Android SDK is basically tool developed for android developers, which allows them to check every minor developed query by running it on Windows. This application furthermore, plays a whopping part in Android development by supporting developers with tutorials and also it provides source codes along with debugger, that lets emulator user to instantly install and check every developed footstep. But Android apps and games’ lovers can use this software to run their favorite apps too on PC.

Genymotion is considered as the next generation android emulator for windows that has many futuristic features in it. You can re-size its window according to your needs and it’s compatible with every size’s screen. Some emulators don’t allow you to paste anything in the software window, but it’s not the case with Genymotion; you can copy and paste any text such as your username or passwords or any other credit card details you want to put for in-app purchases.

If you’ve downloaded any APK file of an Android app, you can simply drag and drop into the Genymotion interface and it will start running instantly, so it’ll save your time.

All of the above Android emulators for Windows 10, 8 and 8.1 are excellent, it was difficult for me to rank them from top to bottom. If you’ve any thoughts to share about this post then let me know by commenting on this article.