TaiG is the leading jailbreak tool for iOS devices, that’s available for iOS 8.1.1 and 8.1.2 yet and if Apple doesn’t patch it in iOS 8.1.3 then it’ll also jailbreak that upcoming iOS build. As I’ve discussed previously on techzend that I’ve found TaiG the most seamless jailbreak tool till now. After Pangu, it seems that hackers are getting smarter than Apple’s developers because they are finding exploits continuously in almost every new iOS version. Recently TaiG team has introduced latest version of TaiG jailbreak tool i.e. TaiG V1.2.0 for iOS users with iOS 8.1.1 and 8.1.2. 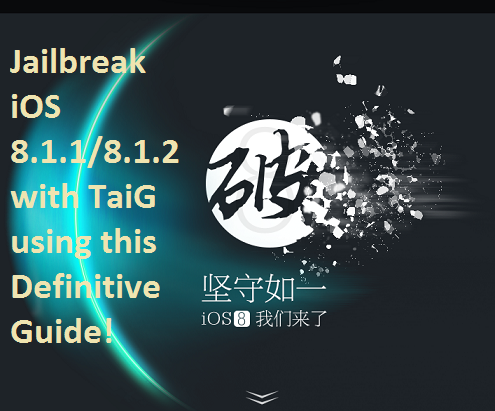 First, I’m going to provide a brief introduction of jailbreak and why it is necessary for iOS users. iOS doesn’t provide feature like Android, and iOS users aren’t able to perform many tasks in their iDevices because Apple devices don’t support them. While Android is open source and there are lots of apps in Google play store by which Android users can perform plenty of things in their devices, on the other hand iOS users don’t get any perks; in one sentence, jailbreak is to make your iDevice user-friendly. From past few years, hackers had tried their best to provide jailbreak for almost every parent iOS version and TaiG is the most recent jailbreak hackers team that have provided the TaiG tool to jailbreak iOS 8.1.1 and 8.1.2.

Before starting the TaiG jailbreak tutorial, I would let you know a few things that are important for non jailbroken iDevices’ users. If your device is in warranty then you’ll lose it when you’ll jailbreak your iPhone, iPad or iPod touch, because Apple just hate jailbreak. Just like every other jailbreak tool, TaiG can make your iDevice full of bugs and can expose you ion front of hackers, because TaiG tool will insert Cydia store in your iDevice and that’s a third party store. Undoubtedly you’ll get lots of apps, tweaks and utilities from Cydia but not all those are free.

If you’d a jailbroken device on iOS 7x or iOS 8x and want to upgrade and jailbreak with TaiG then follow this guide to backup and restore your Cydia tweaks and apps.

You can remove the TaiG jailbreak anytime you want by using this guide to remove TaiG for iOS 8.1.1/8.1.2.

Step 1: First you should backup your iPhone, iPad or iPod Touch with iTunes.

Step 3: Now Download TaiG jailbreak tool from here and connect your iDevice with your machine. 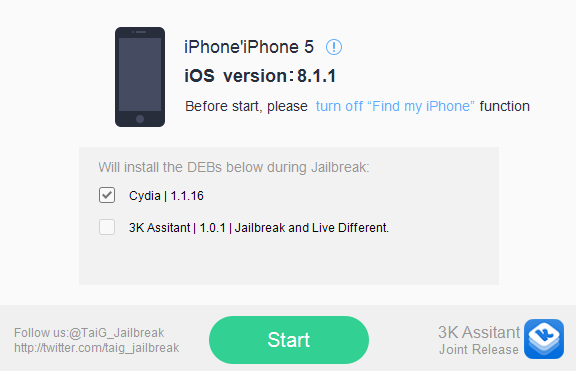 Step 5: Now click the “Start” button and the TaiG tool will start jailbreaking your iPhone, iPad or iPod Touch. After few seconds it will restart your iDevice and you’re done with this jailbreak process. 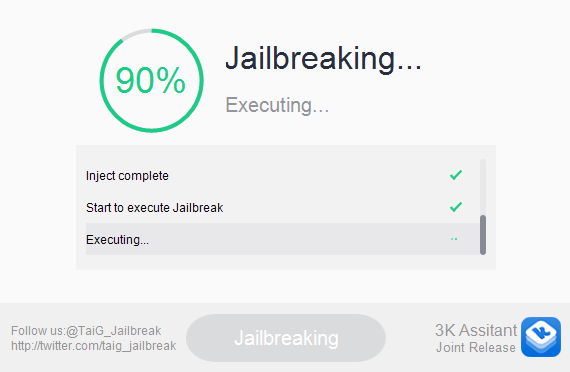 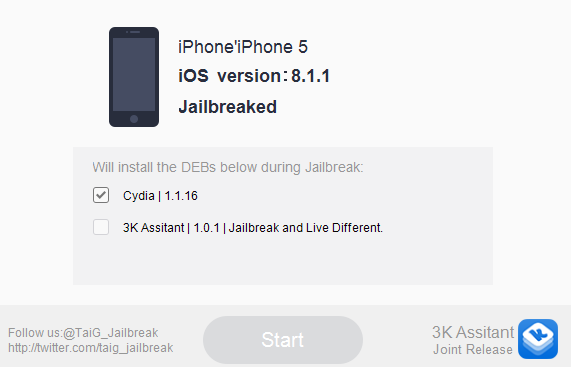 It’s possible that Apple would patch this jailbreak in upcoming iOS 8.1.3 or 8.2, so jailbreak your iOS 8.1.1/8.1.2 device now before it’s too late. Moreover, if you’ve any questions regarding this TaiG’s jailbreak guide then let me know by commenting on this article.[/sociallocker]