How to Download and Install iOS 7.1.2 on iPhone, iPad and iPod Touch

Next iOS 7.1.2 version has been released by Apple since yesterday with more bug fixes and improvements. The first improvement is in iBeacon service that handles location services on iDevices. Moreover, you can now get better compatibility with external devices to transfer your data via USB cable. Furthermore the issue of unencrypted email attachments have also been resolved in this newer iOS version.

If you have jailbroken your iDevice with Evasi0n of pangu, then there is a possibility of failure during upgrade process of iOS 7.1.2 (If you are doing it via OTA). So here I’ll show you the method to update your current iOS to iOS 7.1.2 via OTA and iTunes. 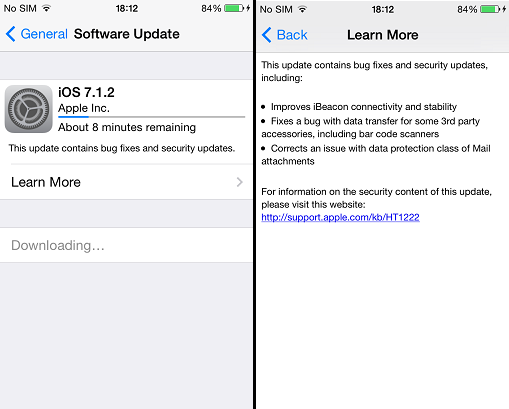 This is simplest method known by almost every iOS geek, just go to your iOS device’s Settings> General> Software Update, and your device will automatically start searching the newer version and will update to iOS 7.1.2 by itself.

Note: You can only upgrade to newer iOS 7.1.2 version from previous iOS versions, but can’t downgrade from upcoming iOS version, i.e iOS 8.

Upgrade to iOS 7.1.2 via iTunes Manually

As said earlier in this tutorial, that jailbroken devices’ users mostly face problem in upgrading their iDevice to newer iOS versions; so they are required to do it via iTunes manually. Below is the step by step guide to download and install iOS 7.1.2 via iTunes.

Step 1: Download iOS 7.1.2 by using below links, make sure you download the correct firmware for your device, if you fail to do so you’ll face installation error on iTunes’ screen during installation process.

Step 2: Connect your iOS device to your PC via USB cable and unlock its passcode.

Step 3: Now from iTunes’ interface, press shift and left click on “Restore iPhone” for Windows PC or (ALT for Mac) and click “Restore iPhone” and select your relevant iOS 7.1.2 version downloaded in the first step.

Note: I’ve done this on my iPhone that’s why everywhere in this article I’m using the word “iPhone”, if you have iPad or iPod touch then follow this guide according to your iDevice.

Good News: Pangu jailbreak for iOS 7.1 also works on iOS 7.1.2, if you want to jailbreak your iOS 7.1.2 device then simply follow this step by step guide.

For further queries and suggestions, comment below on this article.