Mobile devices and Smartphones without a camera are incomplete. Research shows that camera in an iOS device including iPhone, iPad and iPod touch is better than Android Smartphones’ cameras. The research done by SuperSaf in a video shows that iPhone 5s’s camera is better than galaxy S4’s camera in quality, because iPhone 5s’s camera is showing the true view in videos and pictures as compare to the S4’s camera.

The drawback of having an iPhone is only its limitation of features, which makes it the second highest selling brand, the winner is still Android. According to a research 80% Smartphones are running Android OS in them. The camera’s quality is awesome in idevices, but here are some limitations; that these cameras don’t have features like Android devices. These extra features and user-friendly interface make Android devices number one in the market.

Jailbreak launched by evasi0n team has made idevices more customizable just like Androids. My today’s tweak is about the addition of a tiny feature in iPhone video recording. This tweak allows users to see the recording time in milliseconds, centiseconds and deciseconds. 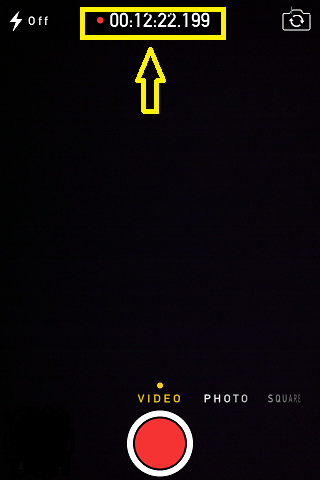 In what situations you need this tweak?

Below are some reasons to use this app:

Low memory: You might be out of memory and your recording capacity is low, so this tweak would help you to intelligently monitor the recording time, so you can record your video in an available memory frame.

Strange for others: This tweak will make your idevice different from other people’s idevice. And you can impress them by showing your recording time. It will make you cool in others’ eyes ;).

Specific timed videos: In case where you want to record a video for a specific time, and you are not allowed to record more than that time and even 1 seconds in excess cannot be recorded, then this tweak will help you a lot.

Simply go to your Cydia app store and write in the search bar “CamElapsed+” and hit enter. From the shown results, select and install CamElapsed+ tweak. Camelapsed+ in Cydia store is free via Biggboss repo.

PoomSmart is author of this CamElapsed+ tweak and it takes only 113 KB of your device’s memory. If you know something else about this tweak, then let us know via commenting on this article.