How to Bulk Delete Apps and Tweaks from Cydia Store [iOS 7.x.x]

Posted in Apple • 8 years ago • Written by Hammad Rafique • Comments Off on How to Bulk Delete Apps and Tweaks from Cydia Store [iOS 7.x.x]

The sole purpose of jailbreaking an iOS device is to get more features with jailbreak tweaks. Now it has become a vast field for Cydia tweaks and apps’ developers whom are creating these tweaks for sake of money. Apple’s app store’s policies are very strict and low quality apps aren’t acceptable by them, moreover they charge $99 for a developer account and it’s not possible to submit your iOS app for review without a developer account; because of these reasons small developers move to Cydia tweaks and apps, they earn via the placement of Adsense ads in Cydia over their tweaks’ page.

We are successfully running tweaks wrap-up section on our blog and due to this I’ve to install and test almost every new tweak in Cydia. Two days ago, I saw that more than fifty jailbreak tweaks were installed on my iPhone 5 running iOS 7.1.2, that was hilarious because the futile tweaks were making my device slower than a turtle. I decided to remove all those tweaks and after uninstalling only five tweaks, I was fed up, because the removal process of just one tweak was taking about two to three minutes. An iOS device with lots of useless tweaks, malfunction usually. If you don’t remove unnecessary ones from the list then your iOS firmware can go corrupt and you may have to install a new one.

Furthermore, If you’ve any paid tweaks or apps installed on your iPhone iPad and iPod Touch then you can back them up with my one of my guide to backup jailbreak tweaks and apps. After a quick search of tweaks in Cydia, I didn’t get any tweak to remove Cydia apps and tweaks in bulk; so I’ve prepared a tutorial that can help you to remove all the jailbreak tweaks and apps in at once. It’s not the one tap tutorial but you can save time by using this guide.

Step 1: Go to Cydia and switch to “Installed” tab available in the tabs option. 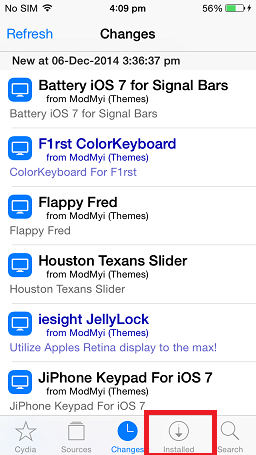 Step 2: Select your desired tweak or app, you want to delete from your iOS device.

Step 3: Tap on the “Modify” button available on the top right of the tweaks’ page’s screen and tap on “remove” button popping up from the bottom. 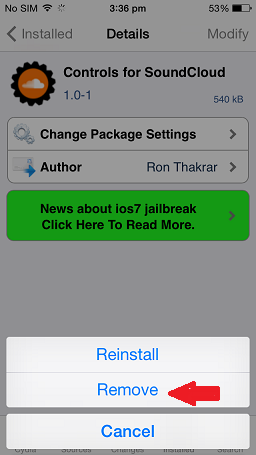 Step 4: Now tap on “Continue Queuing”, your selected tweak/app will be added in the queue of removal tweaks and apps. 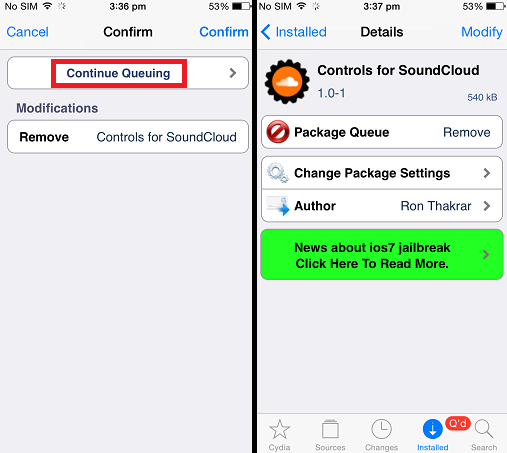 Step 5: Repeat the step 2 to step 4 with all of the apps/tweaks you want to delete, and those will be added in the queue too.

Step 6: After adding them to the removal queue, simply go to the “Installed” tab and tap on the “Queue” button available on the top right and press “confirm. 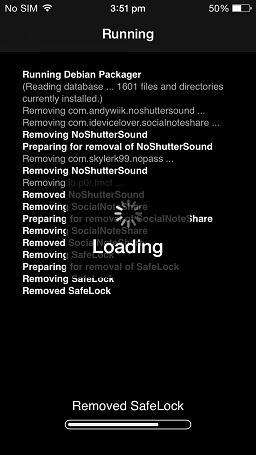 You’re done, all of your selected tweaks and apps will be deleted in just few seconds.