Posted in Apple • 7 years ago • Written by Hammad Rafique • Comments Off on BlowToUnlock Unlocks your iPhone/iPad/iPod Touch with Mouth’s Blow [iOS 7.x.x]

Yesterday, I was arguing with one of my friend about quality comparison of iOS and Android, after a aggressive discussion of half an hour, when I deeply compared features of both OS, my friend was seemed to be winning the debate. But after few minutes, the discussion became hot and I then pulled in the jailbroken iOS devices, just because of jailbreak I won that argument race. No doubt Android is better than iOS in features’ comparison but iDevices are more powerful and better in quality than Android devices (Just talking about the hardware).

Of course we all are in search of futuristic devices and OS available in market, everybody is trying to enhance comfort in his life with the help of handy gadgets, because gadgets are to create ease in life undoubtedly. The last and most powerful argument with my friend was about tweaks and apps that makes life easier, for sample I presented a newly launched Cydia tweak named “BlowToUnlock”. BlowToUnlock putted weight on my arguments and I made my friend silent with just this tweak. 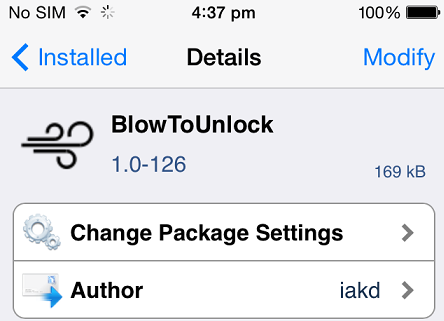 Not only me, but also my friend was amazed with this incredible tweak, because the feature it’s offering is out of this World. Many developers offer only tweaks that fulfil basic needs of a iOS user, but this tweak is much better than many apps and tweaks available in app store and Cydia. You can get it from Cydia without spending any single $.

Below are two awesome features that this tweak brings:

Blow in Microphone and Awake your iDevice

BlowToUnlock allows you to unlock your iOS device with a blow in Microphone too. Furthermore, you can also make this tweak work by saying something to your device.

Moreover, you can configure it via settings and also you can set its sensitivity level.

So now you aren’t required to use your hands in turning on your iDevice, do it with your blow. It’s funny but you can also use this tweak with your blow dryer, fan and air conditioner.

Reported Bug: After turning on BlowToUnlock tweak, volume of your apps and games turn down automatically even you’ve set it to highest point.

If you’ve any other tweak that can turn on your iOS device’s lock just like BlowToUnlock, then let us know via comments.