iPhone 6 vs HTC One M8 and Galaxy S5; Back to Back Comparison

After 9th September 2014, Apple has shown that it’s trying to improve the quality and features of its products, though it has to work harder to compete with the other IT giants available in the market. Yesterday, I compared iPhone 6 Plus with Galaxy S5, I know there is no comparison between a phablet and smartphone but Apple’s iPhone 6 isn’t capable of comparison with galaxy S5 and other smartphones, that’s why I intentionally did a comparison to appreciate the hard work of Apple. But yesterday, I faced lots of criticism because of comparing the unequal products, so I’ve decided to review some of the smartphones fairly and I’m now going to compare iPhone 6 with HTC one M8 and Galaxy S5. 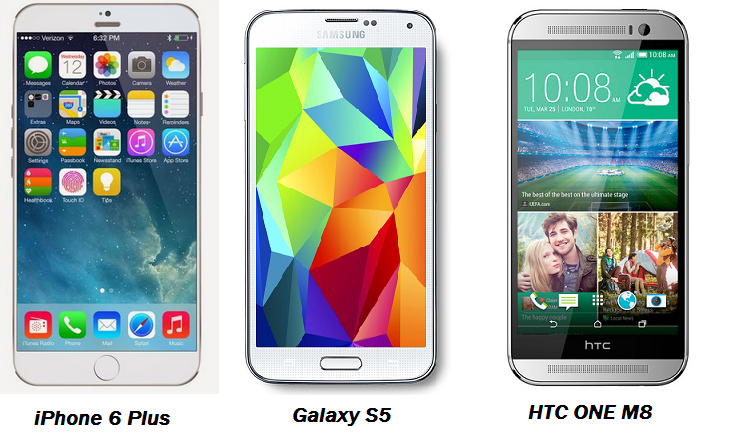 I wasn’t expecting that iPhone 6 will still lose this display race in 2014, because it still have screen size of 4.7″ and with a pixel resolution of 1,334×750, while Galaxy S5 and HTC One M8 both have 1920×1080 pixel-resolution with screen size of 5.1″ and 5″ respectively. I don’t know why Apple isn’t trying to compete with its competitors like Samsung and other smarphone maker companies. Before 2011, Apple’s focus was on features’ differentiation of its products but now Apple has nothing different in its products than other smartphones. According to statista.com Apple’s products are selling higher than previous years but if we compare it with others smartphones’ sales then it’s moving like a tortoise :-/. Statistics on statista show that total number of smartphones and iPhones sold in previous 7 years are 1,118 million in which 150.26 units were of iPhone and remaining belongs for smartphone makers, iPhones are 13.4% of the total sale, that means others are capturing 86.6% of total market share.

I think Apple is living in 2012, because its latest iPhone 6 have 8 mega pixel back camera and the devices launched by Samsung were having 8MP in 2012, while Samsung Galaxy S5 has a 16MP camera with 4k HD video support and HTC one M8 have 4-Ultra pixel camera that is better than a 13MP camera, as it’s explained by PocketNow here.

Furthermore, HTC One M8 has a 5.1MP front facing camera and it records videos with quality of 1080p HD. If we talk about Galaxy S5 then it has a 2MP front camera with the same video capturing capabilities like HTC One M8, but iPhone 6 still have the traditional 1.3MP front camera with 720p video recording.

Apple has claimed that this iPhone 6 is the fastest ever iPhone among all, because it features A8 chip that is something like processor we use in our computers, moreover there is M8 coprocessor that will analyse the atmospheric pressure with the help of barometer and and also measures your motion on the device that will save battery, so you can enjoy long lasting iPhone 6 battery. While Galaxy S5 has 2.5GHz quad-core processor, that’s surely more than awesome and HTC One M8 have a 2.3GHz quad core processor that is lower than GS5 but it doesn’t mean that it works slower.

Till iPhone 5s Apple was famous about its products’ design and grace but after the launch of iPhone 6 the whole story has been changed, the most criticised thing in iPhone 6 is its curved borders, because they don’t look cool. iPhone 5s was much better in design and grace than iPhone 6. Many iPhone lovers are saying that Apple is going back in the time of iPhone 3Gs because of the design of iPhone 6. Anyway, I love the design and grace of HTC One M8 with a Gorilla glass 3. But the incredible thing is Galaxy S5 is the waterproof body, but for HTC One M8 and iPhones you’ve to purchase a separate waterproof protection outer to save them from water and dust.

From the release of first iPhone, iPhone users keep demanding a better battery time but the worst news is that still iPhone 6 doesn’t have a long lasting battery time, the time is almost equal to iPhone 5s’s battery time. iPhone 6 and HTC One M8 both have the same problem of quick battery drainage, because both have up to 14 hours of talk-time while Galaxy S5 has talk-time of up to 21 hours, that’s pretty good.

Moreover, Battery of Galaxy S5 can be removed easily by opening the back cover but if you want the take out the batteries of iPhone 6 and HTC One M8, you must have a screw driver kit for them.

Here I’m going to reveal the price without contract.

I think Galaxy S5 still wins the race in terms of quality and price and HTC One M8 is the 1st runner up, while iPhone 6 is on the last position because of its poor battery time, camera, price and display resolution.

There are lots of features in these devices so it’s difficult to compare all of the features one by one, so I’ve just compared the important ones. If you’ve any other information regarding these devices then let us know via commenting on this article.

4 Comments so far. Feel free to join this conversation.